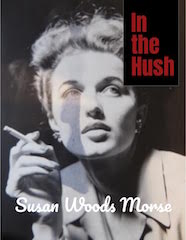 PRESS RELEASE: Susan Morse’s first chapbook, In the Hush, will be published by Finishing Line Press and is available May 2019. The author currently lives in the Willamette Valley, having recently moved from Maine. The poems in this chapbook explore family relationships and the toll that Alzheimer’s exacts on families, as described below:

By way of the vivid image, the exact reverberating detail, and considerable courage, Susan Morse takes us down through the layers until we reach bedrock. She is the middle generation. Children grow up and leave. Elderly mother descends into dementia. Every stage of life is wrestled into poetry. Describing her own youth: “I railed against my tether, belligerent / like a surprised heifer under the ax.” When she gets a letter from a friend who has witnessed the beheading of a chicken: “I envision my mother; / her cotton wool head on a block. / I think what if sometimes a little death / is better than incoherence / or soundproofed green walls?”

—Shirley Glubka, author of The Bright Logic of Wilma Schuh

Susan Morse’s new collection, In the Hush, unfolds as a journey through relationships, nature, and time, with a sensibility to the harsh edges of the human condition. The persona woven through these poems doesn’t mince words. Titles such as “You Don’t Need to Keep Talking at Me, I Already Know You’re Going” combine with images of Alice in Wonderland’s “glass coffin of summer heat”. Morse’s nuanced, ever-changing landscape is compelling. The reader has no choice but to enter into “the consuming interests of the heart” and to grab hold of these deep mysteries rendered with clear-sighted acumen.