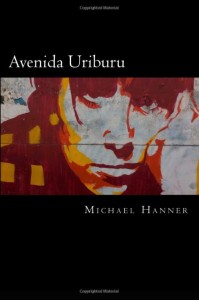 Perhaps not coincidentally I was reading Avenida Uriburu on a train. It was raining steadily. Outside, shapes and colors ran together. I forgot where I was then remembered a jacket I wore as a child. Seeing the jacket that wasn’t there but curiously was, I regained my bearings: reading a book of poems situated in Buenos Aires on a train heading into Oakland, California. “Without images we tend to lose our way,” wrote James Hillman. Avenida Uriburu is a book concerned with images and bearings, with the extent to which one can and cannot orient oneself in territory at once familiar and strange. In lieu of compass and map, poet Michael Hanner both engages the art of noticing and constructs imaginative spaces, inviting gesture, object and persona to inhabit them.

Notitia is the capacity to form true notions of things from the act of attentive noticing. The word notice is related to the words connoisseur, incognito, recognize and gnosis. Each of these words finds resonance in this collection. In many of the poems the speaker is a connoisseur of the sensual, of red wine, chorizo, the scent of jacarandas, color and touch: “Opposites are sewn into your life,/buttons on a dress someone else/must button and unbutton for you./Hold still, they say; and you feel their fingers/moving behind you like butterflies.” Sensual experience is a kind of guide, leading the speaker to glimpse, at times even to inhabit, albeit briefly, the soul of the place.

Governing these poems is an intelligence which resists drawing conclusions. The poems are far more interested in alchemy, in the buzz and hum produced by the proximity of things. In the poem “La Biela,” for example, the speaker is sitting on or near the terrace of a hotel’s cafe, noting what he sees: “The ancient gum shades/the well-heeled diners and riffraff/sucking eggs and medialunas…” But more than that, he is pairing things, letting them rub against each other, creating a static effect. The poem goes on:

Before the entry is a fiberglass statue
of one of the race car drivers
who patronized the cafe
a half century ago
before people began disappearing
into the windy delta.
The whiff of dyed red hair, the chameleons,
the English spaniels sleeping under our feet.

In just a few lines we receive a sense of the strangeness of the ordinary in Buenos Aires. The kitschy fiberglass statue of a pop-culture icon whom we imagine racing over open spaces makes way for the ghosts of those who disappeared into the windy delta in the last century’s political upheavals.

The speaker of another poem, “Avenida Ayacucho,” observes a man presumably a member of the Argentine elite: “The tan is flawless./The face has seen everything./The eyes so like a serpent,/impersonal as Switzerland, perhaps they are only cameras.” Implicit is a sense that by cunning, luck or complicity this man survived the terrible years of 1976-83. In Invisible Cities Italo Calvino notes, “The city, however, does not tell its past, but contains it like the lines of a hand, written in the corners of the streets, the gratings of the windows…the poles of the flags, every segment marked in turn with scratches, indentations, scrolls.” In these poem we find enactments of Calvino’s observation. The past, including the dead and disappeared, not only hovers over but is woven into Hanner’s Buenos Aires.

As well, the poems often evoke a sense of precariousness and contingency: “Here in the south of the world/the power fails/in a city where I speak not the language./We could use the strange key the landlord gave us…/The door knob doesn’t move./The elevators are dead./The mountains hem us in.” Syntax inverts. The same chord plays over and over. Stasis and repetition become species of instability. This is not the first world, and the keys the speaker’s been given are not the right ones. Still, the poet recognizes a kind of kinship with the place through possible fictions, possible lives.

The prose poem The Window postulates a life in a nondescript slab of a building, the poem accompanied by an intriguing photograph of one such building, taken from the ground and angling up, rendering a sense of vertigo. The speaker of this poem lives incognito, resident or traveler, and watches with intense interest the only neighbor he ever sees, entranced by her watering the flowers: “In that entire space the only real color is the red of her impatiens.” Yet in the end this speaker cannot bear the pressure of being recognized, or rejected, and stays away from the window “like the other people who don’t live here.” The city invites and enthralls, and the city withholds. It is itself a kind of tango dance, choreographed by suggestion and nuance, as much by what is not there as by what is.

Again, Calvino provides perspective: “The traveler recognizes the little that is his, discovering the much he has not had and will never have.” Hanner deftly manages this tension. A wise traveler, he realizes his knowledge is limited: “Then Yesterday, vain and harsh, humped home,/dark falling, its work of not knowing/complete without knowing.” Gnosis is achieved but it is not an apotheosis of understanding, not revelation. It has to do with being open to sur/reality, experience whose fabric blends memory, history, dream, and the physical world.

The book’s final poem is an afterword, mapping the vicinity of Avenida President Jose Evaristo Uriburu. Whereas the rest of the poems seek to orient us psychically and emotionally, this last poem locates us spatially: “Two blocks one way is a shopping mall abutting Recoleta cemetery. Two blocks the other way is Avenida Santa Fe….” Rather than summing up the place, this poem allows us to linger with its familiarity, its laundromats, kindergartens, street vendors and grocery stores. We have been somewhere that seemed often strange, a place that offered pleasures and kept back potent secrets and pain that nonetheless bled from the bandaged wounds, a place “drunk with its own ooze and babel.” Perhaps we can never fully orient ourselves. The best we can do involves noticing and creating brief habitations. Our understanding is necessarily limited. These poems suggest that Buenos Aires is both unique and Everyplace, that what beckons and disturbs the traveler on the road, beckons and disturbs the traveler at home and is the condition of being alive at this, or any, historical moment.

Sara Burant is the author of the chapbook Verge. Having temporarily relocated to the Bay Area to pursue an MFA in Poetry at St. Mary’s College, she looks forward to returning to Oregon and its vibrant literary community in 2017.