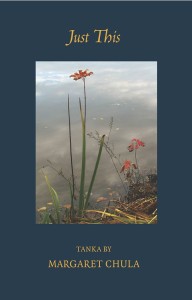 Just This, Tanka
by Margaret Chula,

Imagine there is someone standing in front of you with a lifted hand and upstretched fingers. Two fingers are presenting a delicate object in order for you to see it clearly. Listen as the person whispers to you, “just this.” In that moment you will look at this single lifted object as if there were nothing else in the world. That’s how Margaret Chula’s poems work.

A tanka, in case you’ve forgotten, is a five-line lyrical poem. The name itself means “short poem” and the form is derived from ancient Japanese verse. Although much shorter, generally 31 syllables or fewer, the tanka works a little like a sonnet with a pivotal turn before the end. Unlike haiku which are generally nature poems, the tanka is more likely to deal with human relations.

This collection of 100 tanka, the classical number for such a gathering, is divided into five titled sections: Lingering Fragrance, Who Can Say What Loneliness Is, Hush of Crickets, Trying to Remember, and Yesterday’s Desire. Four sections open with a tanka by the Japanese woman poet Izumi Shikibu who was writing around 1000 A.D. and one opens with a poem by Ono no Komachi from a century earlier.

The book is dedicated “in loving memory of my mother” and here are the first two poems from Lingering Fragrance, the first by Izumi Shikibu and the second by Margaret Chula.

Wakened by the scent
of flowering plum…
The darkness
of the spring night
fills me with longing.

Although Chula writes about lovers, childhood, lost youth, and other subjects, the book keeps circling back to the loss of the mother. Thus her first poem in the last section:

The poems in this collection are often wistful, but sometimes also humorous:

those five pounds I lost
during my gallbladder attack
where did they go?
fourteen baby chicks
scamper in the sunshine

Whatever the subject, these tanka are consistently evocative. Margaret Chula has lived in Japan and made a study of that poetic tradition. In this moving collection, she has taken the inherited form and successfully made it her own. Each small poem is exquisite in its own way, and over and over as you read, you will quietly see and appreciate “just this.”

Reviewer Bio: Penelope Scambly Schott’s verse biography A Is for Anne: Mistress Hutchinson Disturbs the Commonwealth received an Oregon Book Award.  Recent books are Lovesong for Dufur and Lillie Was a Goddess, Lillie Was a Whore.  Forthcoming Fall 2014 is How I Became an Historian.  Penelope teaches an annual workshop in Dufur, Oregon.