a question of mortality by Susan Clayton Goldner
Wellstone Press 2014 $15.00 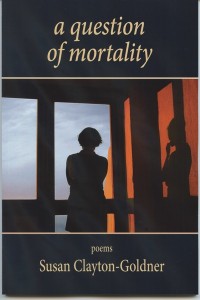 I first had the joy of meeting Susan Clayton-Goldner at a novel-writing workshop led by Marjorie Reynolds in Portland, Oregon years ago. Susan shone as an astute critic and author of family-centered mystery novels. She’s published three: Finding a Way Back, Just Another Heartbeat, and Murder at Cape Foulweather. Since childhood, Susan has devoted herself to honing her craft. Besides being an award-winning novelist and popular blogger, she’s an accomplished poet whose work has appeared in literary journals for decades. This year, finally, her heartfelt poems have been gathered into her first poetry collection, a question of mortality, published by Wellstone Press.

Breaking from convention, all the words in the title on the cover begin with lowercase letters. Perhaps Goldner chose this to symbolize mortality humbling us. A black background frames women in a dark room. Dressed in black with her back to the reader, the central figure seems turned from tragedy, as if Goldner wishes to escape agonizing memories, but forces herself to confront them. Beyond glass, grey sky reveals light breaking through.

In the poems as in the picture, there is a sense that tragedy has transformative effects. In the poem “An Eternity of Hope,” after a brother’s suicide brings pain like “broken glass,” hope does “simmer.” Her grief never disintegrates, but a daffodil poking up from “frosted earth” symbolizes beauty coming back like flames rekindled.

Death softens the poet’s heart, makes her more vulnerable, yet more empathetic. For example, in “When My Father Slipped into His Death,” Goldner writes:

Near the foot of his bed, I expect fear,
But the face and hands are too familiar.

In a rush of lost affection, I uncurl
his fingers, pet a ruffled arch of brow…

and the years of rage, too hot to touch,
cool at once into this mourning.

The words “mourning,” “longing,” and “memory” echo through this book. Fresh images and powerful lines move the reader through profound experiences of love and loss. Regret, loneliness, forgiveness, fury, sadness—the many stages of grief recur. The book pays tribute to complicated, flawed but cherished family members who have died, leaving their survivor bereft yet determined to write these moving, elegiac poems honoring them.

Many of the poems employ nature and weather to convey inner landscapes.

But one season bleeds into the next
And what nurtures can also strip away.
Soon the wildflowers will
fold in their perfect petals and disappear
into the pine-scented earth.
Only their memory will flicker
across the quiet face of time.

…pointing that bullet
toward the empty hole in yourself.

In closing, I’ll point out a powerhouse poem: “In My Favorite Easter Memory of Lillian Nell.” She is: “Chanel # 5 and whiskey,” “stiletto heels,” “spider-leg lashes.” I won’t give away the poem’s stunning end. Read it and this whole collection for narrative poetry strikingly passionate, honest and profound.

Lois Rosen’s poems and stories have appeared in over a hundred periodicals. Traprock Books published her poetry book Pigeons in 2004. Tebot Bach Publishers published her second collection Nice and Loud in 2015.