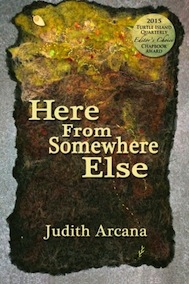 Judith Arcana’s chapbook Here From Somewhere Else was a perfect choice for the Turtle Island Quarterly’s 2015 Editor’s Prize. The press focuses on deepening connections to the natural world. The eighteen poems in the collection take the reader from observations of nature in cityscapes (primarily Chicago and other Great Lake Towns where Arcana lived for more than 25 years) to the forests, trees, and birds of the Pacific Northwest.

Arcana begins the collection exploring how an urban mind can open up to the natural world. One route is the imagination. A short poem, “Dreaming the Indian Ocean,” describes a childhood dream of flying in her bed to where whales swim in green deep water. She uses close observation to describe the appearance of nature in the urban landscape – the sky darkens over garages, birds speak to each other in graveyards, the rhythm of a train races through Queen Ann’s lace and milkweed, and the mica sparkles in sidewalks – what the poet compares to stars falling from the urban sky. Middle-aged women on sidewalks and lawns watch crows on picnic tables and fountains. Her poem “City River” asks, Does the river know it once was wild? and questions what people watching a river may have lost with the taming of an urban waterway.

The narrative arc of the collection is movement. Arcana now lives in Portland. The poems move away from Chicago lakefront cityscapes into places familiar to people of the Pacific Northwest. As a transition, the poet is sitting in the woods in “Soon.” Her cell phone rings, a reminder of the world she recently moved away from. The news concerning her father’s health is not good.

This poem continues a motif of lyric observations of how light plays on natural surfaces. Sprinkled throughout the poems are compounds words like fireclouds, waterhearts, goldsilver, and riverlight. Light flashes through graceful branches and falls on the rushing river not as diamonds and gold but as diamonds and gold wish they could reflect light. Arcana asks, Can I be in love with the light on the water? The answer is yes.

That vision carries forward how the poems progress. In “Metamorphoses” Arcana plays with all the possibilities her connections might mean. Can the narrator be an old woman in a cottage deep in the woods? Or an ivory owl swooping at squirrels? The dark bird watching children march to the school bus? In “Wild River Sister,” the identification between the poet and a wild river includes both light and the churning river which feels like the poet’s mind.

These poems are long on wonder. “The Man Who Loves Trees feels the heart of a tree like his own pumping dark liquid to limbs. The affinity with trees in “This Side of the River” concludes with a question:

Do you understand the language of trees? Most of us can’t
ask them these questions; we can only raise our eyes, worship
their solemnity, their reach, their rough skin made of rain.

Oregonians can celebrate that Arcana chose to come here from somewhere else. She hosts a monthly poetry show on KBOO community radio in Oregon and online. She writes poems, stories, essays and books, some of which are available through the Multnomah County Library.

Beside the small press award for this book, her fiction collection reflecting the history of reproductive rights Soon To Be A Major Motion Picture was the 2014 winning prose chapbook from Minerva Rising Press. Arcana is a “Jane,” a member of Chicago’s pre-Roe underground abortion service and a long-time supporter of reproductive justice.

Tricia Knoll is an Oregon poet whose work appears widely in journals and anthologies. Her collections include Ocean’s Laughter (Aldrich Press) and Urban Wild (Finishing Line Press). In Summer 2017, The Poetry Box, a Portland-based press, will release Broadfork Farm.