Still Life with Judas and Lightning
by Dawn Diez Willis 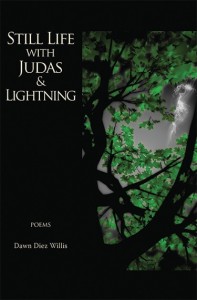 When the title of a poetry book feels like a poem in itself, you know you are in for an enriching read. Still Life with Judas and Lightning, Dawn Diez Willis’s first full-length collection, fulfills that expectation, with poems that artfully explore big themes, including faith, loss, betrayal, death, and love.

Nearly all the poems in the collection are free-verse narratives in third-person – a point of view that might feel detached in another poet’s hands, but which Willis brings to life with intimacy. I use the label “narrative” loosely, as the stories are not tidy arcs with clear resolution. Yet many of the poems could easily blossom into short stories or even novels. The characters she introduces, whether pulled from Biblical stories, history, art, personal experience or her imagination, feel achingly real and hook the reader into caring about them.

Willis delves into the complexity of family relationships in many of the poems, particularly the pain of separation, both through death and estrangement. She beautifully expresses the human bonds that tie us even in the midst of abandonment and abuse, as illustrated in the heartbreaking “Second Week in Foster Care”:

They want their own mother.
blood-bonded and love-hobbled,
the mother of fault and foil and belt,

and in “Girl with Greenstick Fracture”:

Still, it is not all purpled eye and cracked teeth
knuckles unsheathed and time punched dumb.
It is also love-struck palms on sheets,

The book is rife with tragedy, but also hope and compassion. Flawed and fragile characters find comfort in the natural world and in their own strength. For example, in “Keith Decides to Live Anyway,” the reader can only guess “what he did and what was done to him,” but his shame is tempered by grace in the powerful closing lines:

Even as he walks, he is surprised to wonder
Where isn’t beauty hidden?

Many of the characters in the poems also take comfort in religion (or try to). As one might expect from the book’s title, the Bible and faith figure prominently in the collection. Willis’s approach, however, is askance; the characters tend to be caught between longing for faith and the starkness of a seemingly random universe. In “Alma in the Camposantos” for example, Alma “tries to pray”:

o splinter keeping company with splinter
o air within a rinsed jar
o nail and wrist fastened in loneliness
something contain me
fasten me, house me

Willis has taught introductory art courses in addition to poetry and often draws inspiration from visual art. With keen curiosity, she explores the act of creation as well as the peripheral elements of art – the tools and materials from which art is made possible. In “After Rodin’s Danaϊd,” Willis turns her lens on the imagined model. Even readers unfamiliar with the sculpture will appreciate the magic of the art-life connection expressed here:

When he is finished, she unfurls again into existence,
remade from the person
drowsing in the white load of rock.

And of course, art and religion merge in the title poem, a startling word painting depicting the Biblical story of Judas’s suicide. As with all her subjects, Willis treats this one with enormous empathy. She portrays Judas not as villain but as human:

His tongue lies burning in his mouth.
What can words do now?

The branch offers sanctuary from the world
and its endless choosing,

A cadre of outlaws weaves through the collection as well. Several iconic figures from the Wild West, including Jesse James, Bonnie and Clyde, and Billy the Kid make appearances. And again Willis takes a “behind the scenes” view, illuminating the contrast between romanticized personas and the haunted, broken lives they most likely led.

I’ve focused more on subjects and themes here than on craft, but as you can glimpse from the excerpts above, Willis masterfully employs sound, rhythm, slant rhymes, dazzling language, and vivid imagery throughout the collection.

As already mentioned, there’s a pervasive use of third person perspective. Willis offers a convincing and beautiful argument for that choice in her poem “Third Person Sacred” (which, interestingly, is written in the second person):

Sometimes you think of your own story
and it is both familiar and not,
and you must question the details,
the slant, the cant of its little roof and shutters,
the home of what you know about yourself,

Light spills down on the diorama
and something has brought you here to witness
the holy moment, any moment,

Still Life with Judas and Lightning does exactly that – spilling light on moments both holy and ordinary, calling the reader to witness and to question the details of their own story. And I, for one, was grateful for that opportunity.

Kelly Eastlund is a member of OPA, Lane Literary Guild, and the Red Sofa Poets critique group. Her poems have appeared in several journals, including Shot Glass Journal, Wild Goose Poetry Review, and The Whistling Fire. She lives in Springfield, Oregon, with her husband and two dogs.