To That Mythic Country Called Closure
By M 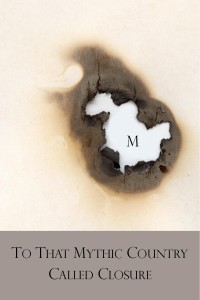 First, it’s the in-your-face narrator who grabs you by the throat and won’t let go. Then it’s the imagery – visual and auditory – that plunges you into a grief so painful you put the book down to catch your breath. Finally, it’s the realization that the author is one of those rare artists Anaïs Nin described when she said, “The role of the writer is not to say what we can all say but what we are unable to say.”

To That Mythic Country Called Closure is not merely a collection of poems about grief. It’s an experience – both visceral and reasonable, universal and personal – that you will not forget.

M hints at the chapbook’s stance on grief in the epigraph where she cites Michael Bloomberg’s 2002 recollection of his experience with women who had lost spouses on 9/11:

She then proceeds to create a narrator who challenges all those “suck-it-up” stalwarts who can’t conceive that grief can rage and paralyze so pervasively. A young widow admitting – without apology – that her “only addiction is a dead man,” this narrator embraces grief as a tribute to the husband who died at the age of forty-eight. Simultaneously, she stands in solidarity with those whose inconsolable loss makes the notion of any future nearly impossible.

In the opening poem – a two-stanza piece called “Yes, we the young widows” – the book’s themes unfold. The narrator sets the reader up with a list of “reasonable” antidotes widows use to ease their pain: Ambien, Ativan, Celexa. She follows with details that are understandable:

. . .We wear wedding bands
too large for thumbs, make a bathroom fixture
of his dirty coffee mug, buy towels
to match. We sit in his chair,
stare at our own vacant one.

But then, in typical M fashion, the narrator clobbers us at the end of the first stanza with the first of many raw details about her husband’s death:

We’d never tell you we performed
CPR while he vomited in our mouths.
And that we’d do it again.
What would erase that taste?

Take a breath. This is only the first poem!

I woke that morning in bed with him
dead, his shoulder pressing my arm,
deflated on a fistful of needles and pins.

That April morning in this bed,
attempting to beat the life back into the body
of your beloved with a fist folded in on itself, trying
mouth-to-mouth with whatever was left
after the screaming.      Alone,
with bodily proof that you’d failed.)

Back to the opening poem: The second stanza hurls the first of the narrator’s diatribes at us. It’s worth quoting in its entirety as a primer about how not to approach someone who’s lost a loved one. In a society skittish about death, much less talking to a woman about her loss, the lines are brutal and instructive:

We hate your sad eyes, your Teleflora
delivery vans, cards telling us
our “insert Name of Deceased”
will remain forever in your hearts
where they don’t belong. Please don’t send
God’s love to enfold us. We hate God.
We’d hate God less if,
while he was snatching our husbands,
he’s had the courtesy to set the garage
on fire. We hate having to comfort
you when you call. Hate you simply
because we once were you, convinced
we were prepared.

The narrator takes us to her husband’s memorial service, to her own stint in a mental hospital, to grief counseling sessions, to her own kitchen. She pulls no punches about her own breakdown. In the opening of the prose poem “To the One I’ve Hurt (letter to Nick I’ll burn on a borrowed barbecue next Friday),” she writes:

Would you think it ironic I’ve landed where I once
committed you? This city holds no other rehab for widows
strung out on grief, who refuse food and sleep as if they were
poison, who lie on highways counting on a Peterbilt with a driver
blind from an 18-hour run, new Hondas stacked like cord word
for the dealership on Kietzke Lane.

Neither does she shy away from letting the reader know she still talks to – and receives messages from – her dead husband. In the poem aptly titled “Communing with the dead,” she complains to him about attending his memorial service in Eagle, Colorado with people who “knew you better/ than they know me.”

And in “Husbands of widows have it easy,” she admits:

… he’s still hanging around the apartment
like drapery, swaying from a rod, filtering
the undertones, bringing his brand of shadowing
to everything that goes on there. Changing songs
on the CD player so you’re forced to stop
in the middle of private conversations to say,
See, see! It’s like a sign. That song meant something to us.

Her “addiction” to a dead man ensures that the nirvana of closure remains a myth.

To say that To That Mythic Country Called Closure is the real poetic deal is an understatement. It offers not only lessons on how poems and prose poems of lasting power and beauty can be crafted, but how they can weave themselves into a sequence that proclaims grief has no expiration date and no one who’s lost a loved one ever loses loss. In the process, M’s collection becomes a monument to all widows – and, for that matter, to any one who has experienced the death of a parent, child, sibling, friend – by saying what most cannot say.

Carolyn Martin is blissfully retired in Clackamas, OR, where she gardens, writes, and plays with communities of creative colleagues. Currently, she is president of the board of VoiceCatcher, a nonprofit that connects, inspires, and empowers women writers and artists in greater Portland, OR, and Vancouver, WA.